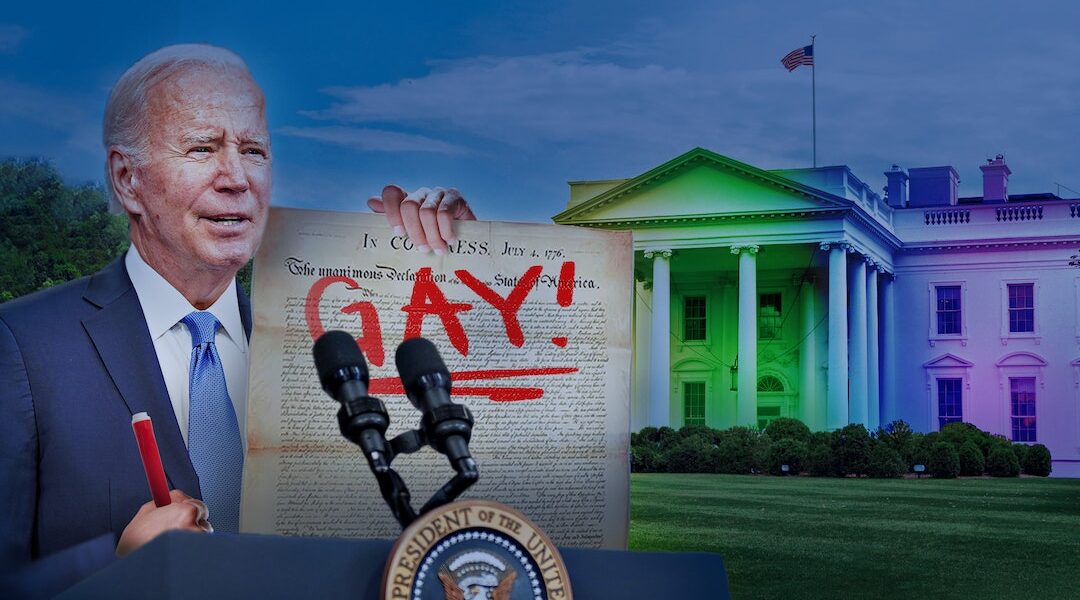 Unless you’ve been living in a cave, you probably have seen reports that Democrat President Joe Biden this week signed the notorious “[Dis]Respect for Marriage Act.” The legislation would not have passed the U.S. Senate without the support of twelve RINO Republicans, including the usual suspects Mitt Romney (R-Utah), Susan Collins (R-Maine), and Lisa Murkowski (R-Alaska). The bill also received support from 39 so-called “Republicans” in the U.S. House, including from out-going Liz Cheney (R-Wyoming).

President Biden signed the legislation at a White House ceremony to which drag queens were invited and attended.

However, did you know that marriage predates civil government? The institution of one man and one woman for life is the core building block of society and was created several generations before God instituted civil government. (See Genesis 2 & Genesis 9.) Therefore, the idea of civil government redefining marriage is kind of like a child renaming his mother and is just as absurd as Congress passing a law attempting to redefine gravity.

Those who, as our Founding Fathers, recognize that the source of law is “the laws of nature and of nature’s God” are outraged by this attack that actually destroys marriage, harms children, and threatens religious liberty.

In the past, advocates for unnatural forms of unions have exclaimed the mantra “live and let live,” but as this movement continues its political shift, it has become clear their real objective is to use the coercive power of the state to force people to pretend like there is nothing unscientific, immoral, or damaging about this behavior in society and to force them to participate in it.

Furthermore, they still have further to go. In the President’s speech, he said this bill was only one “step” toward further goals.

The legislation President Biden signed into the federal code Tuesday is a dangerous and damaging bill that could be used to force states across the country to recognize polygamy, child bride unions, as well as same-sex unions as legitimate marriage. Many have called this an attack on religious liberty and free speech. The 10th Amendment to the United States Constitution states: “The powers not delegated to the United States by the Constitution, nor prohibited by it to the States, are reserved to the States respectively, or to the people.” The last time we read the Constitution, the power to redefine marriage was not one of the specified powers delegated to the federal government.

This is a clear federal overreach that attempts to force every state to recognize the absurd unions that leftist extremists who don’t approve of reality like to call “marriage.” Please remember the words “sexual orientation” have no clear limiting legal definition and could potentially include pedophilia which is now being destigmatized as “MAP” (minor-attracted person).

The Worldview in Five Minutes reported: “The bill will disproportionately harm believing Christians, such as Jack Phillips and Barronelle Stutzman, whose religion will not allow them to participate in homosexual nuptials. A Gallup poll reported people who ‘attend church weekly remain the primary demographic holdout against homosexual marriage,’ with almost 60% opposed.” The Heritage Foundation also provided a Q&A where you can learn more about this despicable new federal legislation here.

Appalling federal bills like this reveal the need for more Republican Assembly chapters across the country that can work together to expose RINOs and apply grassroots pressure when important votes like these arise. If you have friends and fellow Patriots in other states, please inform them of the NFRA and encourage them to start or assist a Republican Assembly chapter in their state.