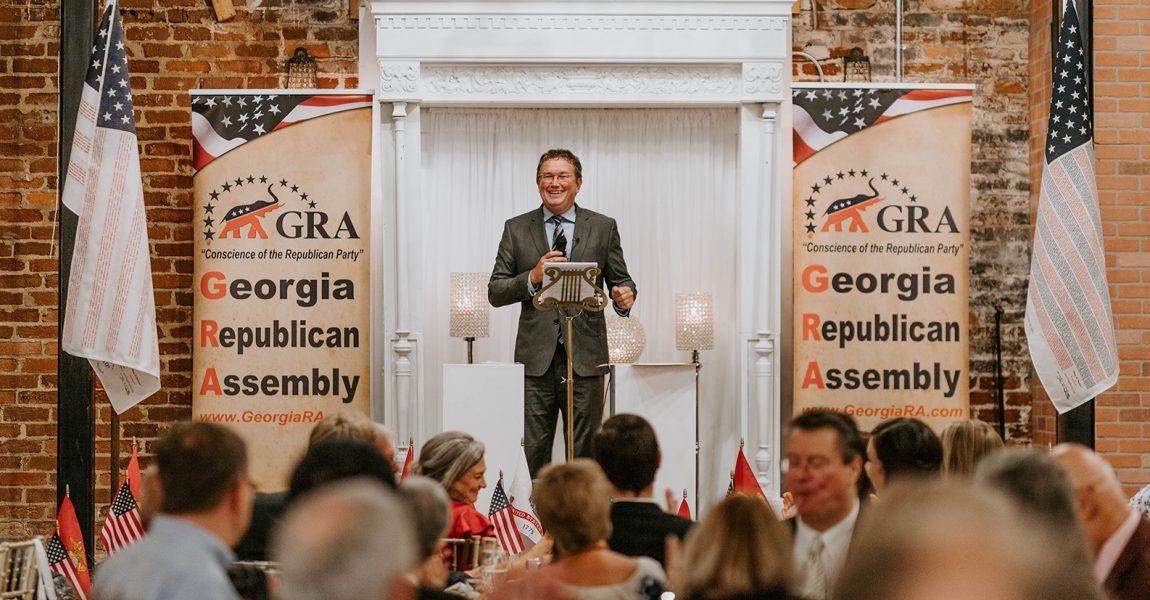 The GRA was honored and pleased to have Republican hero Congressman Thomas Massie (R-Kentucky) as our keynote speaker at this year’s GRA President’s Dinner on September 11th. We hope more Republican elected officials will learn from and follow Massie’s example of commitment to Republican principles, even when it is temporarily unpopular, for the long-term health of the United States. For those who missed his excellent speech, or for those who would like to watch it again, now you can view it from the GRA’s YouTube Channel:

We appreciate those Georgia Congressmen who have joined with Congressman Thomas Massie in his recently proposed legislation to protect our U.S. soldiers from being forced to be vaccinated. Georgia Republican Congressmen Marjorie Taylor Greene, Jody Hice, Barry Loudermilk, and Andrew Clyde have each signed onto this legislation. No one should be forced to wear masks or be vaccinated. We do believe in Medical Freedom for all. 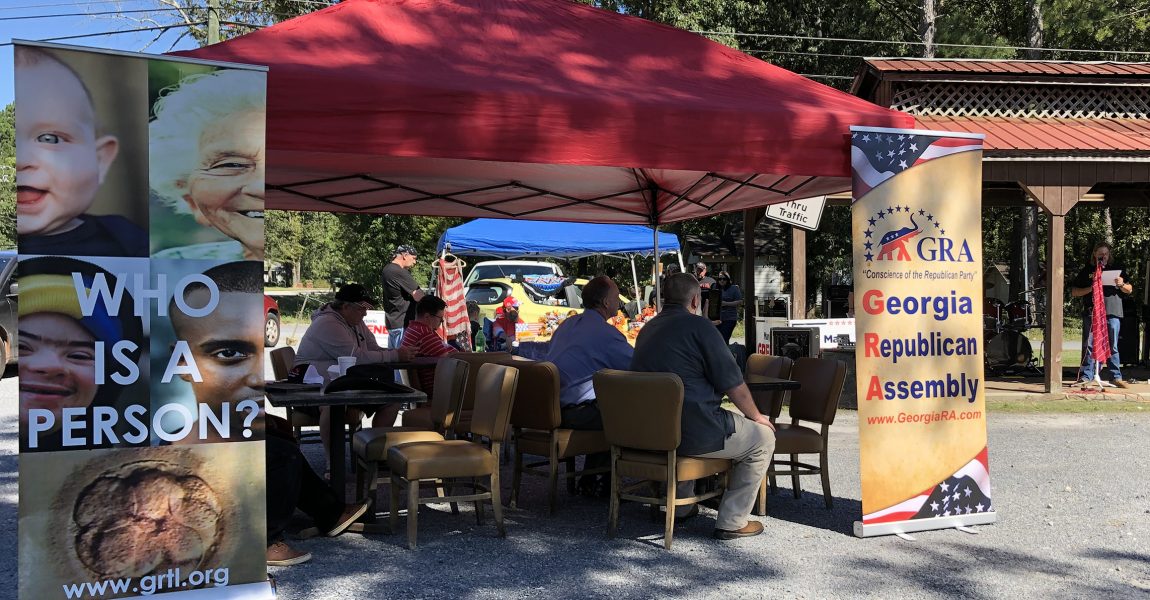 Today the Georgia Republican Assembly participated in the “We Demand an Audit” Freedom Rally in Rome, Georgia where the GRA’s NFRA Director Nathaniel Darnell spoke alongside other activist leaders and candidates protesting the failure of Republican elected state officials to thoroughly and properly investigate the allegations of voter fraud in last year’s elections. The event was organized by GRA member Charles Stoker of northwest Georgia. The event was planned several weeks prior to former President Donald Trump‘s announcement that he would be hosting a similar rally himself in Perry, Georgia.

“We do believe Secretary of State Raffensberger, Lt. Governor Duncan, and Governor Kemp had it within their constitutional jurisdiction to investigate the allegations of voter fraud prior to certifying the results, and they had the moral duty to do so,” said GRA NFRA Director Nathaniel Darnell, who also serves as the elected Chairman of the Cobb County chapter. “A special session of the legislature could have and should have been called last December, and there are audits and investigations they could pursue now. That being said, we do not necessarily think that means that Vernon Jones would be an improvement as the Republican nominee for Governor. State Rep. Vernon Jones has an extensive voting record as a Democrat state legislator, and you can see it on our voter scorecards on the GRA web site. His record does not demonstrate loyalty to Republican principles, and so there is no reason to assume he would necessarily do a better job than Governor Kemp.”

“People compare Vernon Jones to Ronald Reagan because they both were Democrats who switched parties and ran for Governor in their states,” Darnell continued. “But Reagan went through a 18 year transition from being a Harry Truman Democrat supporter in 1948 to running for Governor of California as a Republican in 1966. During that transition Reagan proved his change of heart was real by stumping repeatedly for Republican candidates such as Nixon and Goldwater in California. It wasn’t an overnight change that appeared opportunistic. People have a good reason to be skeptical of Vernon Jones.”

The GRA has not yet voted to endorse a candidate in the race for Governor and probably will not until after qualifying is completed. It takes a two-thirds majority of the membership of the GRA in order for a candidate to earn the organization’s endorsement.

Other speakers at the rally in Rome included Ricardo Davis who was representing VoterGA, an organization that has been leading a key lawsuit in Fulton County to bring to light evidence of election fraud in that county. Garland Favorito has been the primary spokesman of VoterGA and works closely with Ricardo in that effort. 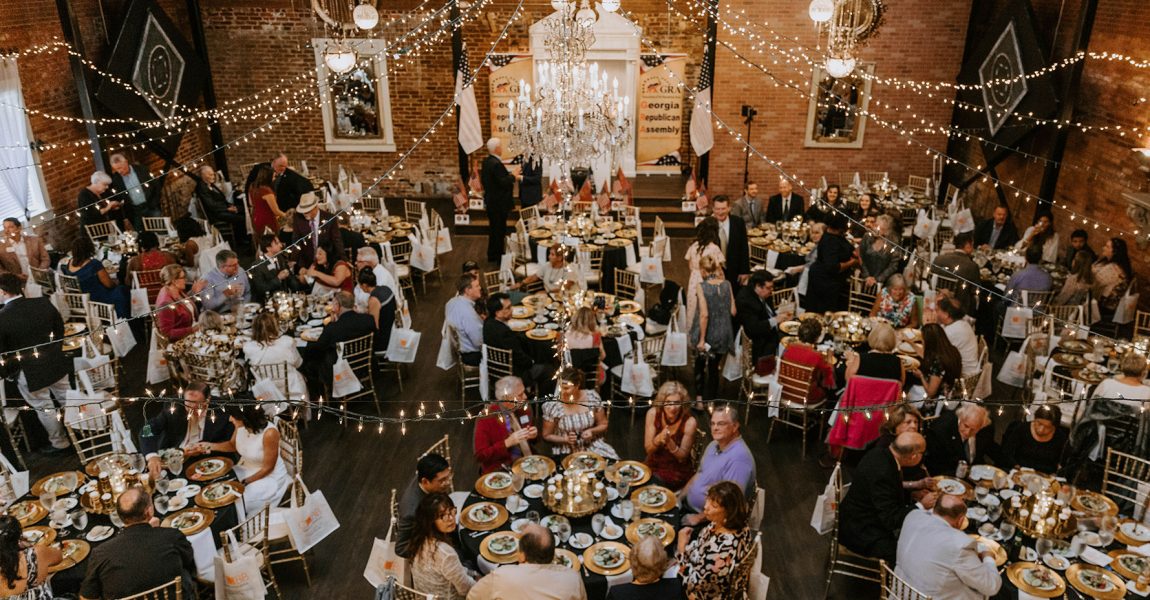 The 2021 4th Annual GRA President’s Dinner was a beautiful success! Attendees from all over the state were treated to a delicious three-course meal artfully presented in honor of the memory of the sacrifice of 9/11 and then heard from constitutionalist hero Congressman Thomas Massie (R-Kentucky). Congressman Massie is raising the bar for conservatism within the Republican Party, and it was an honor to have him speak as our keynote. We hope more of our elected officials from Georgia will learn to follow in his example of principle and courage.

In particular, we appreciate him being the only Republican in the U.S. House willing to go on record opposing every single multi-trillion dollar wasteful expenditure bill in response to the pandemic over the last 18 months, including the original “CARES Act” that started us on a path toward rising inflation!

Below are some select photos captured at the event. We appreciate everyone who helped to organize, plan, and host the event! In particular, we appreciate the careful planning of our NFRA Director Debra Williams, who has organized the GRA President’s Dinner for the last several years.