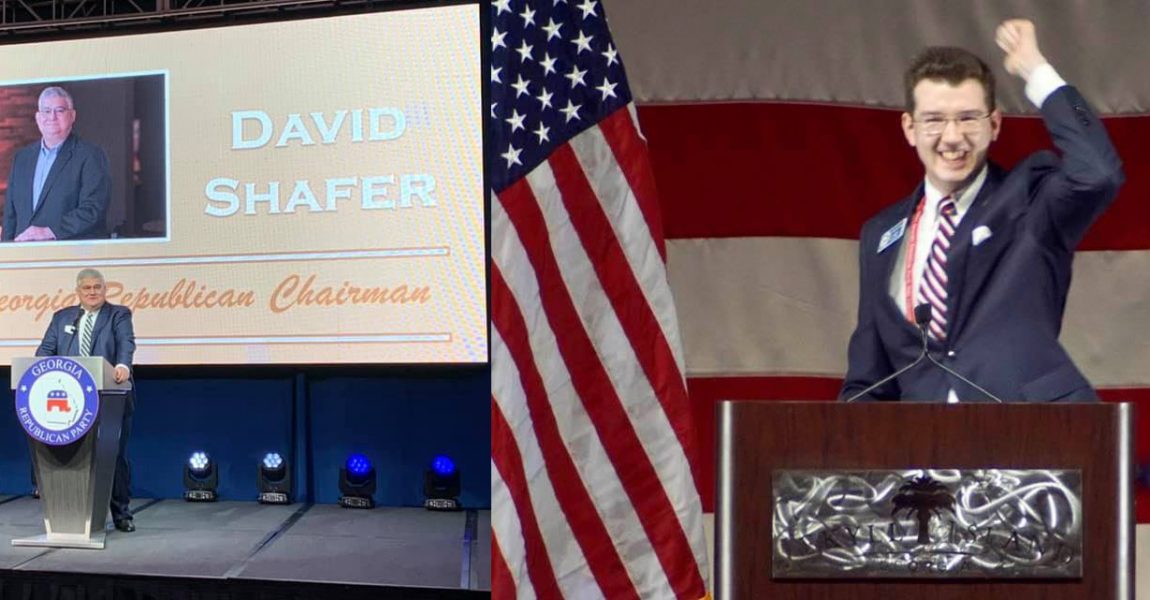 Jekyll Island, GA—Congratulations to all of the GRA members participating in the GAGOP elections today, as candidates and delegates! We are excited to report that two of our leading endorsed candidates for state-wide party office have once again won election: David Shafer and Brant Frost V were both overwhelmingly re-elected for GA GOP Chairman and 2nd Vice Chairman, respectively. Each of them received a more than super-majority of the standing vote at the state convention in Jekyll Island.

Last Monday, the GRA membership met online via Zoom for an live electronic endorsement convention with members from across the state. Participants were able to pose questions to each of the candidates online. Using the online system Runkeeper, GRA members were able to cast ballots in favor of endorsing each of the contested GA GOP officer candidates, the Over 80,000 Chair candidates, and the Under 80,000 Chair candidates. The system enables users to pre-cast their initial ballot as well as any secondary or tertiary ballots in the case of a runoff between multiple candidates. As usual under the rules of the GRA, a candidate can only be endorsed if he or she receives at least a two-thirds majority vote of the participating GRA membership.

In a three-way contest this Saturday, endorsee Pamela Reardon ran a strong campaign for 1st Vice Chair and received the second-highest number of votes, but ultimately lost to Establishment-candidate B.J. Van Gundy. GRA member Surrea Ivy received a standing ovation at the state convention during her exceptional speech in the GA GOP Chairman’s race, ultimately coming in second. Jason Shepherd was another GRA member who has in many ways made some strides for improvement in Cobb County as the former county Chairman, but he came in third place in the race for GA GOP Chairman.

David Shafer and Brant Frost V were also endorsed by the GRA two years ago when they each first won election for state party office. Over the last two years Brant Frost’s hard work substantially increased his margin of victory from his more narrow win in 2019.

David Shafer ran in 2019 under a pledge to raise funds and cut spending to get the GA GOP out of debt—something GRA leaders on the state committee had been pushing for over six years! Shafer made good on his promise, having the debt paid off by March of 2020. Shafer also promised to do something else the GRA has been pushing for years: allow the GA GOP to establish its first ever state party platform. Not only did Shafer accomplish that, but he appointed prominent GRA members such as former State Senator Mike Crane, Kay Godwin, and GRA 3rd Vice President Nathaniel Darnell to the committee to draft the platform, and he appointed Brant Frost V to Chair that Resolutions Committee. He also appointed GRA President Alex Johnson to the GA GOP’s standing Rules Committee. In addition to this, Shafer helped to setup party organizations in all of Georgia’s 159 counties for the first time ever. This track record of working with the GRA to promote its objectives, rather than against the GRA as the two previous GA GOP Chairs have done, had a lot to do with why he earned their endorsement once again.

We appreciate all the GRA members who offered themselves as candidates at the state convention and were willing to serve. We look forward to continuing to elect the best candidates to positions of influence in the GA GOP who will prove themselves eager to work to help us promote Republican principles in Georgia.

Jekyll Island, GA — The newly elected body of GA GOP State Committee members from each of the 14 Georgia Congressional Districts met this afternoon, the day before the State Convention, for the first time. The highly anticipated item on their agenda was the appeal to resolve the dispute of the Fulton County GOP on their election of their county chair at their county convention. Both Susan Opraseuth and the incumbent Trey Kelly had representatives on the State Committee arguing on their behalf.

The State Committee took up the question of whether to affirm the Fulton County GOP’s election of Susan Opraseuth as the new county chair. That vote by the State Committee was very close, and GRA members were very active in the discussion. As GA GOP Chairman David Shafer stated at the meeting, how each State Committee member voted should not have been based on a preference for one candidate over the other, but rather on the merits of whether one was procedurally elected properly under the rules.

GRA President & attorney Alex Johnson from DeKalb was among the State Committee members who presented arguments on behalf of Susan Opraseuth’s rightful election, along with GRA Treasurer Nate Porter from Fulton (recently elected as the 6th District GOP Chair), and Caroline Jeffords from Fulton.

Lobbyist attorney Brad Carver (the 11th District GOP Chair) from Fulton was predictably one of the leading advocates on behalf of Trey Kelly.

The advocates against the affirmation of Susan claimed that such an affirmation would mean the State Committee would be “picking the Fulton Chairman” when in fact what it really would have done was affirm the choice that the Fulton GOP County delegation already made. (See more details below.)

On the question of whether to affirm the Fulton County GOP’s election of Susan Opraseuth as Chair, the final vote was 72 in favor to 76 against.

Photos, videos, and notes were taken by eye-witnesses at the State Committee meeting who recorded those who stood up to vote against affirming Susan Opraseuth’s election. Among those who voted against her affirmation were:

State Committee members who deviate from the wishes of the delegates who elected them should be identified so that they can be held accountable (although some in the meeting protested having a photo of their vote being taken). In the 11th District GOP Convention, for example, had the delegates elected Boyd Parks rather than Michael Williams to the State Committee from Cobb, and elected Ellen Diehl rather than John Longshore from Cherokee, the outcome of Susan’s election affirmation would likely have been different.

It is worth mentioning that Michael Williams, John Longshore, Louis DeBroux, and Brian Laurens from the 11th District GOP are all people who are on record voting against holding Brad Carver accountable for giving public financial support to Democrats while he served as a Republican officer, and they have never expressed regret about that decision. Trey Kelly did the same thing. They have voted contrary to the GRA in virtually every issue of controversy at various levels over the last ten years in GA GOP committees. Their vote on this occasion is not a surprise. Past behavior is predictive of future conduct. This is why the GRA and its affiliated chapters often recommend certain activists who have a reputation for election to certain positions of influence within the GA GOP and does not recommend others.

As a result of this first vote by the State Committee regarding Fulton, the State Committee then voted to require the Fulton County GOP to hold a third election for the position of Chair next Saturday. This one would not be done using poker chips. That vote passed 74 in favor to 72 against.

While most State Committee members voted along the same lines as in the first vote, a few members did vote differently. Joseph Brannan and Brian Laurens, for example, voted with the GRA on this second proposal, while Jason Shepherd voted against it. Ron Hooper did not abstain on this vote but voted in favor of it with most of the rest of the GRA membership. However, Brad Carver, Michael Williams, John Longshore, Louis DeBroux, and Andrew Abbott were among those who again voted against this second proposal.

What Is the Controversy All About?

GRA President Alex Johnson has emailed several reports about this controversy previously and its ensuing appeals.

According to multiple witnesses to the Fulton County GOP Convention on both sides of the dispute, the controversy arose when the convention attempted to hold a vote with colored poker chips to represent each candidate. Votes for Trey Kelly were supposed to be submitted with a blue poker chip, and votes for Susan Opraseuth with a yellow chip. Incumbent Fulton Chair Trey Kelly was declared the winner of the first ballot by a three-vote margin, but a number of discrepancies with the vote were quickly pointed out, which led to a second ballot.

Among the discrepancies: Two of the poker chips counted for Trey were identified as actually being green chips rather than blue chips. In addition, the report said that one more person had voted than the number of eligible delegates who qualified.

The body voted to override the determination of the Convention Chair and voted to hold a second vote. Under Roberts Rules of Order, the body of delegates at the convention have the authority to make such an authoritative decision and for it to be binding.

On the second ballot, which took place about 45 minutes after the first vote, Susan Opraseuth won by more than a ten vote margin. The Fulton County GOP Convention concluded with the body holding to that result.

Trey Kelly appealed that decision. Because Fulton County resides in multiple congressional districts, he could chose to have the controversy brought up on appeal to the district most likely to be friendly and agreeable with his position. He chose the 5th Congressional District GOP, which did reverse the decision of the Fulton County GOP Convention and declared Trey the winner on the first ballot. Susan Opraseuth appealed that decision to the State Committee.

Fulton County has fallen under increased scrutiny over election fraud allegations from the general election last November, and how that potential fraud impacted the entire state of Georgia and nation. It is no wonder, then, that Republicans across the state would find an interest in Fulton getting itself properly in order.