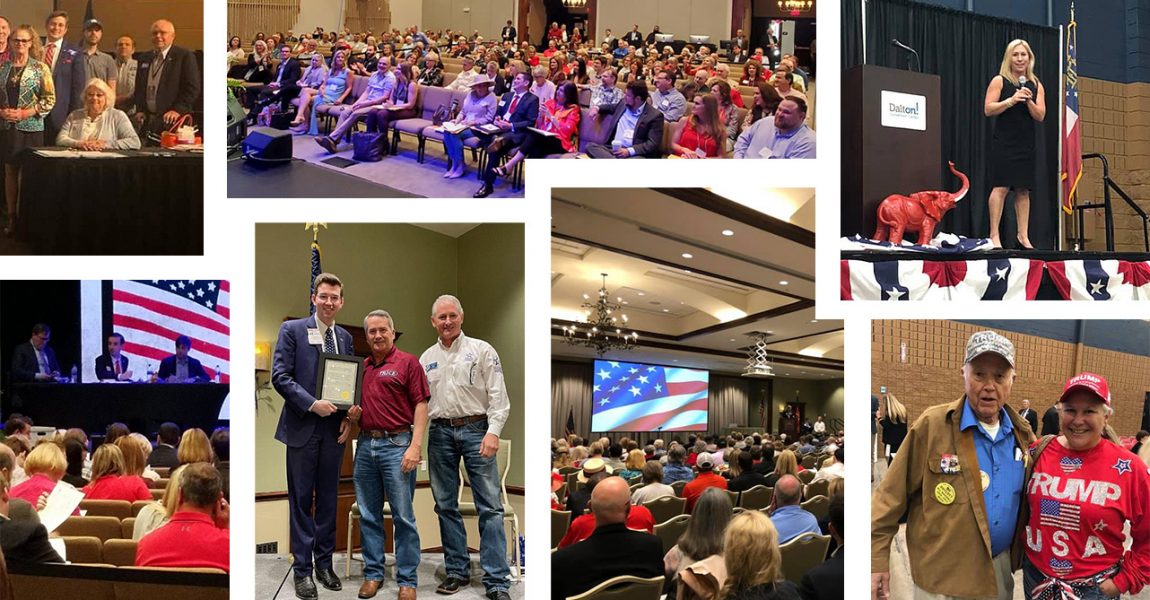 Last Saturday saw the Georgia Republican Assembly membership make great strides for freedom as a new record of GRA members from around the state were elected to District & State Committee positions in the GAGOP! We appreciate all the new activists who participated and made these victories possible.

In the 14th Congressional District GOP Convention, GRA-member Denise Burns(Catoosa) was elected as the new Chair of the 14th District—Congresswoman Marjorie Taylor Greene ‘s district! In the 6th District, our GRA Treasurer Nathan Porter (Fulton) was elected as the Chair of the 6th District. These will join 3rd District Chair Mike Crane (Coweta) who was re-elected on the GAGOP Executive Committee, the board that oversees Georgia’s republican outreach and operations across the state.

These come on the heels of great victories across our county leadership in the state. For example, the GRA’s former NFRA Director Ron Hooper was elected as the Chairman of Banks County. GRA member Salleigh Grubbs was elected as the new Chair of Cobb County promising reform as well. The Cherokee County GOP cleaned house, wiping out obstructionists and bringing in fresh new leaders eager to work together!

As a result, it is much more likely the GA GOP Executive Committee & State Committees will be able to bring some of the latest examples of Establishment corruption in Chatham and Fulton counties to a just resolution in the weeks ahead.

Now the GRA activists, eager for reform and accountability, in the Georgia Republican Party turn their eyes toward the GAGOP State Convention in Jekyll Island on June 4-5th.

Of course, the GRA and its affiliated chapters has been pointing out for years how Republican officials often pay lip-service to Republican objectives and principles but chicken out when they’re in the walls of the capitol building. That’s why we were especially excited this year about the strong batch of resolutions coming through Republican county and congressional district organizations in their conventions reprimanding officials such as Secretary of State Brad Raffensperger, Lt. Governor Geoff Duncan, and Attorney General Chris Carr as well as renewing the GOP’s commitment to conservative pro-American policies.

While many in the Establishment say that the resolutions at the conventions don’t matter, we observe that they actually do matter a good deal to the media. The Atlanta Journal Constitution, for example, published a story about which resolutions passed and which ones did not, providing much publicity .
It also apparently does matter to the Establishment because of how they manuever to prevent the convention delegates from even brining up the resolutions for discussion and a vote. For example, at the Cobb GOP Convention, party leaders deliberately chose to schedule their convention to only go to 2:30pm and then insisted that the convention had to adjourn before bringing up the resolutions because they were out of time due to the facility rental agreement. This tactic was attempted again at the 11th District Convention, but this time it was thwarted as the new activists grew more savvy.

GRA members Banks Wise (Cherokee) and Cobb GOP Chair Salleigh Grubbs generously agreed to split the additional cost of renting the convention floor for the extra time needed to address the resolutions at the 11th District Convention. In the 6th District, the delegates filed outside into the parking lot and proceeded to complete their convention business, braving the 75-degree heat and unrelenting sunshine.
The resolutions not only called out corrupt Establishment officials such as Speaker David Ralston, Raffensperger, and Duncan, but also spoke out against the encroachment in government of Critical Race Theory and ideas such as “vaccine passports.”