39 of Georgia’s 159 counties have incorporated GRA local chapters either through individual county Republican Assembly organizations or by regional organizations. Many of our members, however, also live in counties that have no organized local chapter.

• Cobb County Republican Assembly: The Cobb County chapter was established in July 2016 during the run-off between Tim Lee and Mike Boyce for Cobb County Commission Chairman. Due to Tim Lee’s responsibility for the Corporate Cronyist Braves Stadium deal, in which taxpayers were put on the hook for a billionaire’s private enterprise to the tune of $400 million, the Cobb RAs endorsed Tim Lee’s opponent and successfully defeated Tim Lee. The following year the Cobb RAs were the first local chapter within the GRA to win “Chapter of the Year” when they successfully helped GRA member Jason Shepherd defeat incumbent Rose Wing for Cobb County GOP Chairman. In 2018 when incumbent District 1 Cobb Commissioner Bob Weatherford indicated that he would support an increase in real estate taxes, the Cobb RAs endorsed Weatherford’s opponent Keli Gambrill and helped her to successfully win election. Cobb County has hosted the GRA State Convention and the President’s Annual Dinner 2018-2019. In 2021, GRA members in Cobb helped Salleigh Grubbs and her team win election as the new Cobb GOP leadership, and helped Keli Gambrill win re-election as Cobb Commissioner District 1 in 2022. Learn more about them at their web site at https://cobbgra.com/ or on their social media at https://www.facebook.com/gra.cobb/.

• Gwinnett County Republican Assembly: Gwinnett County has had the second-largest collection of Republican voters in Georgia, although it has been undergoing some dramatic changes in recent years. The Gwinnett RAs have distinguished themselves for the excellent events they have organized and hosted in their county, including trainings on Roberts Rules of Order, candidate forums and debates, and an annual RA Christmas Party. In 2021 they won the “Chapter of the Year” award. Learn more about them at their web site at https://gwinnettcountyra.com/.

• Hart County Republican Assembly: Chartered in February 2022, the Hart County RA chapter borders the South Carolina state line on the path through interstate 85 beside Lake Hartwell. This chapter is led by Silas Roberts, who also serves as the GRA’s Chapter Relations Chairman.

• Lanier Republican Assembly: The Lanier RAs are named after the counties that surround the lovely Lake Lanier in northeast Georgia near Interstate I-85: Hall, Forsyth, Banks, White, Lumpkin, Dawson, Jackson, Madison, and Barrow counties. Composed of these nine counties, the Lanier RAs in 2018 won the GRA “Chapter of the Year” Award for leading in growth of membership and becoming the largest member-chapter in the Georgia Republican Assembly! They have also co-hosted with the Gwinnett Republican Assembly on several annual RA Christmas parties that has been well attended and encouraging for all involved.

• Northwest Georgia Republican Assembly: The Northwest GA RAs was originally composed of four counties in the northwest region of Georgia bordering Tennessee: Catoosa, Whitfield, Gordon, and Murray. In 2022, they added Walker County to their regional chapter. Led by Eddie Caldwell and Joanna Hildreth, this regional RA organization made state-wide headlines when they ran a successful campaign in March 2019 in Catoosa County to defeat a proposed T-SPLOST. In 2022 they also successfully got GRA-endorsed candidates Colton Moore (“A” rated) elected to State Senate and Mitchell Horner elected to State House. Learn more about them on their social media at https://www.facebook.com/NorthWestGeorgiaRepublicanAssembly/.

• West Georgia Republican Assembly: The West GA RAs are composed of 15 counties, most of which participate in Georgia’s 3rd Congressional District. Their chapter won the GRA “Chapter of the Year” Award in 2019 for successfully campaigning to defeat a T-SPLOST as well as helping a GRA-endorsed candidate for State House to win a special election in October of that year even though he was outspent 2-to-1. The West GA RAs also hosted the first GRA State Convention in Coweta County in 2017 and two more in 2021 and 2022. 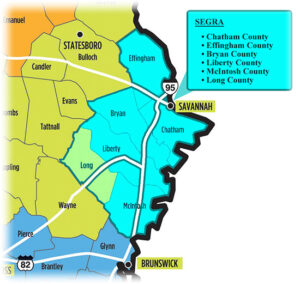 • South-East Georgia Republican Assembly (SEGRA): SEGRA consists of six counties along the heart of Georgia’s small coastline: Chatham, Effingham, Bryan, Liberty, McIntosh and Long. These include some of the oldest counties in Georgia, some dating back before the War for Independence in 1776. Founded originally by Dean Burnette, SEGRA is led by Brittany Brown and her local chapter’s executive committee with a vision on expanding GOP appeal and shaking up the Establishment to improve politics in the southeast region. Co-founders of the state GRA Kay Godwin and Pat Tippett have also operated near this chapter’s region for many decades and held a great deal of influence. Learn more about them at their web site at https://segra.us/ or on their social media at https://www.facebook.com/southeastgra/.