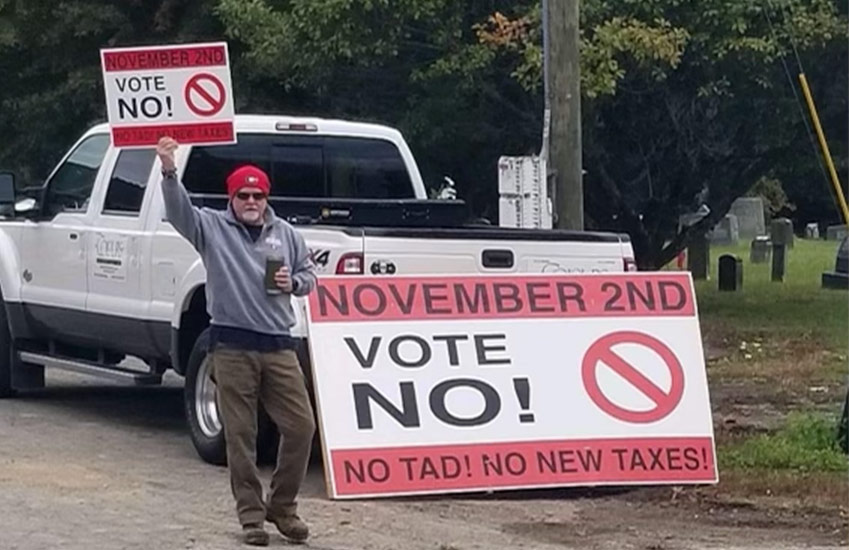 Northwest GA—On Tuesday, voters in Ringgold, Fort Oglethorpe, and Catoosa County all overwhelmingly rejected a controversial Redevelopment Powers proposal on the ballot that would have given the local municipalities the authority to create “Tax Allocation Districts” (TADs) and provide Tax Increment Financing for redevelopment.

These redevelopment powers operate on the premise that “blight makes right”! That is, any part of the community which the local government agency deems to be “blighted” can become a “project area” and be artificially stimulated by tax dollars through corporate welfare to developers. A similar measure was defeated earlier this year in Whitfield County.

One of the concerns expressed by voters was the permanence of this proposal, if adopted. Like many additional or emergency powers, when once surrendered by the people and seized by the civil government, they have no expiration date and power thus surrendered is not easily restored.

Joanna Hildreth wears many hats as an activist in the area. In addition to serving on the GRA Executive Committee, Joanna was elected this year as the Catoosa County GOP Chair, and she serves as the Vice President of the Northwest GA Republican Assembly chapter. She was very pleased with the outcome of the vote on Tuesday: “I opposed the referendum because at the root it increases the government’s power. I believe in small government, and this was a step in the other direction. We can’t trust that every county board in the future will wield these additional powers wisely. If the referendum had passed, the people would never be able to vote to end it. Only the governor has that authority.”

The Catoosa GOP voted to publicly oppose the Redevelopment Powers—in opposition to their state legislator and fellow Republicans State Rep. Dewayne Hill (R-Ringgold) [who has an “F” on his GRA Voting Scorecard, by the way] and Rep. Steve Tarvin (R-Chickamauga) who together co-authored HB 778, HB 764, and HB 766, the legislation that put the Redevelopment Powers question on the ballots in the first place. “The GOP precinct chairs were instrumental in calling voters, door-knocking, and sign-waving,” Hildreth explained. “Mitchell Horner, Ringgold precinct chairman of the Catoosa GOP and chair of our policy committee, started the Committee on Catoosa Taxation to raise money and purchase signs.”

The Catoosa GOP partnered with other groups like the Northwest GA Republican Assembly and also utilized social media, radio and television interviews.

Liberty activist Nick Ware attended the October 4th Town Hall meeting about Redevelopment Powers that was held at the Colonnade. “After I heard that presentation I knew I had to push forward,” he said. “I wan’t going to let the ‘powers that be’ have power forever and not stand up!” With that inspiration, Nick decided to put his liberty convictions in action and prepared a presentation about the potential danger of this measure and began spreading the word in the County. Ware and many Catoosa voters believed this measure was problematic for various reasons: it’s interference with the free market, the indebtedness it would create, the lack of accountability, and the special favors and deals it would allow to be given to the political elite and their friends.

“I utilized as many tools as I could to educate the voters,” said Ware.

Catoosa homeowners were also concerned about the threat of property seizure through eminent domain under this proposal.

“Supporters say if you keep your property looking tidy, you have nothing to worry about. But what about the elderly and disabled who can’t keep their house tidy?” said Nick Ware.

Nick expressed concern for people like the elderly couple who live and operate a small fruit stand on Boynton Road against whom a complaint had recently been filed or the woman overcome with worry and brought nigh to tears because her property borders an area intended to be developed. “I advised her to just hold out and see how the vote goes”, he said, “and she was very happy to hear about the outcome.”

Originally, eminent domain required proof that a property was being taken for “public use” such as the widening of a road, but in 2017 Georgia law was amended to allow local governments to use eminent domain to condemn blighted property and transfer it to a private developer for purposes of economic development. Of course, the original property owner is still entitled to receive what the civil government officials deem “just compensation,” but what is that to the owner of his childhood home or the property that has been passed down through family generations?

Not all Catoosa citizens share these concerns, however. John Pless, the Public Information Officer for Catoosa County told the Chattanooga Times Free Press, “What this would have done is essentially leverage the power of government to redevelop blighted areas. This was not a tax increase, and it was absolutely not a land grab.”

The referendum question was only narrowly defeated in the City of Fort Oglethorpe with only 51.05% voting “No” to Redevelopment Powers, and in the City of Ringgold 60.29% voted “No.” However, in Catoosa County voters rejected it by a staggering 82.55 percent! The fact that the measure failed in all three districts, to the local GRA and liberty activists, is a triumph worth celebrating. Voter turnout was remarkably low with only 4,927 ballots cast for the entire County, a mere fraction of the 32,099 votes cast in Catoosa in the 2020 Presidential election. Some voters have suspicions that controversial measures like these are intentionally put forward in election years where voter participation is expected to be low in order to increase their chances. But the vigilance and community organization of grass roots activists were able to win the day in spite of the low turnout.

George Bettersby protested the TAD in the public comments portion of the October 21 Catoosa Board of Commissioners Meeting. He said, “The county has a horrible reputation for conflicts of interest… The County has had so much problems trying to explain the TAD to taxpayers, they even brought in an expert from Atlanta to try and explain it to us old rednecks. Certainly the devil is in the details. However, one thing you can bank on: the local builders, developers will get richer on the aching backs of our taxpayers young and old.”

While some voters may not fully understand Redevelopment Powers, Tuesdays polling showed they were nonetheless skeptical and may have reasoned intuitively that, if government officials were not asking for more money and more power, they wouldn’t have to get voters permission with a new ballot referendum.

The proposal was very broad and generic in nature and did not specify a certain area or a private developer that would benefit from it. This means the underlying question put to the voters was ideological:

Should local government have the power to artificially stimulate or develop an area that the free market has rejected and is therefore not developing organically?

Should the government provide enhancements that were not merited in the free market?

Should local government have the power to seize private property, against the will of the property owners in order to accomplish the community enhancements that elected officials deem beneficial?

The triple rejection of this proposal by the Cities of Ringgold, Fort Oglethorpe and Catoosa County is likely an indication of voters core worldview and fundamental beliefs about the role of government in the lives of the citizenry. A belief that would appear to differ from their elected representatives Dewayne Hill (R-Ringgold) and Steve Tarvin (R-Chickamauga) who sponsored the legislation.

Vote No . Let’s get our Country back, one vote at a time

Very good article, but another point this article did not address is the fact that this issue was NOT important enough to be a Special Election. To open up the two precincts for three weeks’ early voting then on the actual voting day, opening ALL the precincts, paying utility bills and paying workers, cost the taxpayers approximately $30,000. This should NOT be allowed to happen. This issue could easily have been added to the 2022 ballot, but like the article said, those creating this stupidocrisy thought it would pass, knowing that fewer people would be going to the polls. Many people I talked to knew nothing about it. When the initials, like TAD, are spread around, no one knows what that is. Who did the wording on the ballot? There wasn’t enough information to identify what the issue was about. I hope people start coming to commission meetings; they will learn a LOT. We need to vote out these elected officials (state and local) who come up with this garbage.