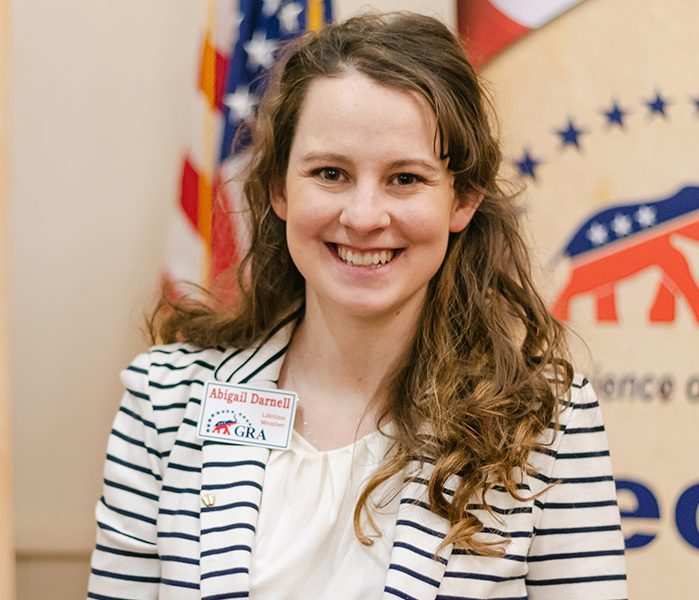 Abigail is a Christian, homeschool graduate who is passionate about the ideals underlying the Republican Party. She feels called to help make America constitutional again and sees effective political activism as part of Christian ministry: a natural outflow of loving one’s neighbor and the Great Commission. She was elected to fill the vacancy of the Third Vice Chair of the GRA in 2021. Earlier that year she was also elected to serve as a precinct officer for LM03 in the Cobb County Republican Party.

She currently serves as the Vice President of GA Right to Life, having been elected to that position twice, and previously co-led the Northwest Georgia Right to Life chapter. She has trained and volunteered with the Center for Bio-ethical Reform doing pro-life campus outreach at liberal colleges and doing street activism.

She served for five years as Secretary of the L’Abri Symphony, a non-profit community orchestra in Dalton, GA. For seven years she worked doing bookkeeping and payroll for Keith Cochran CPA accounting firm. She is currently in her first year working as an insurance agent with Bankers Life alongside her husband Nathaniel.

She has an interest in true journalism, untainted by Marxist narratives, and in 2020 worked as a writer and correspondent for The Tulis Report, a conservative talk radio show in Chattanooga, TN.

She is a wife and mother and is enthusiastic about the vital role of mothers in preserving conservatism for the next generation.