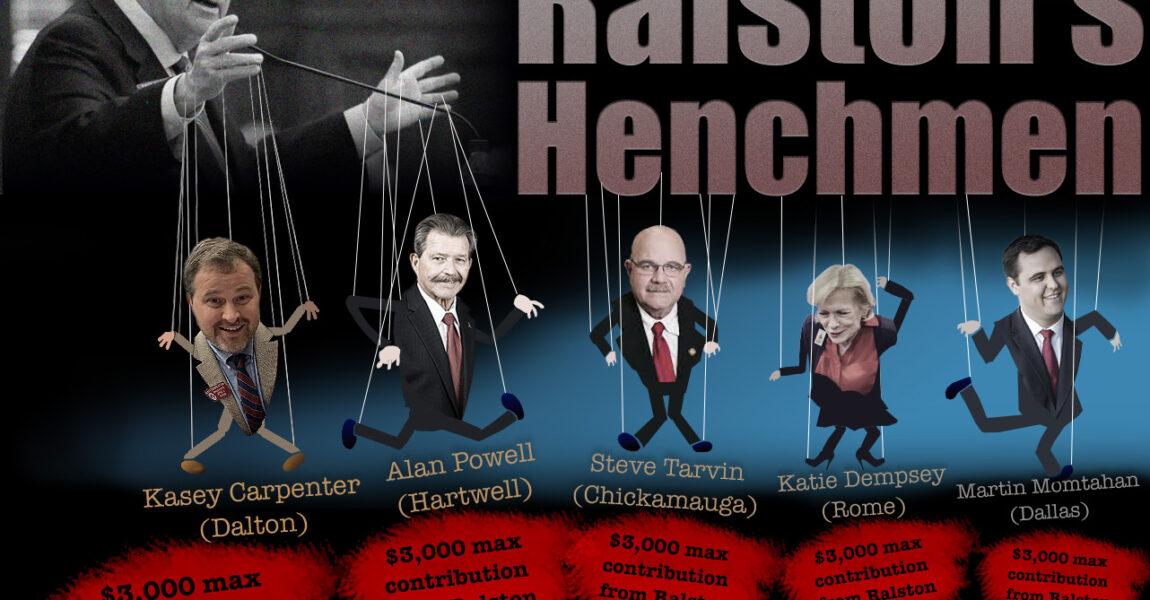 With less than a week before the May 24th Republican Primary Election concludes after several days of early voting, the public campaign disclosures are out — and we now know who RINO Speaker David Ralston (Blue Ridge) is prioritizing for re-election and how much he gave! Of course, Ralston is backing his most loyal cronies in the State House, and if you wondered who they are, wonder no more!

One example is State Rep. Kasey Carpenter (Dalton), one of the leading advocates for corporate welfare (aka “Cronyism”) in the state legislature. Carpenter has had a consistent “D” vote scorecard rating with his most common score being 40% in the State House. He supported Ralston’s original H.B. 1013. He also recently took to the floor of the House to take pot shots at Congresswoman Marjorie Taylor Greene (GA-14). He’s far to the Left of the population in his rural district in Dalton—if the conservative Republican voters in his district would only be made aware!

Besides getting the maximum $3,000 contribution from Speaker Ralston, you can see above that Carpenter’s next big contribution came from lobbyists for Hollywood in Georgia.

Carpenter is being challenged in the primary by GRA-endorsed candidate Nick Voyles, who has also been endorsed by Georgia Right to Life and Veterans for America First.

Yet another example is State Rep. Alan Powell (Hartwell) to whom Ralston also gave his maximum $3,000 contribution. He’s garnered one “F” 32% and three “D” ratings on his vote scorecard over the last few years in the legislature. He voted in favor of Ralston’s original terrible version of H.B. 1013 (“Mental Health Parity Act”). Powell is being challenged by Dylan Purcell in State House District 33.

Incumbent State Rep. Steve Tarvin (Chickamauga) has also been pushing cronyism in Northwest Georgia for years, including the recently defeated Tax Allocation District (TAD) proposal. Last session he voted for the original terrible version of Ralston’s H.B.1013 (“Mental Health Parity Act”), and he has claimed there were no problems with fraud during the 2020 election. Tarvin is being forcefully challenged by our endorsed candidate Jim Coles for State House District 2.

Then we come to to incumbent Katie Dempsey (Rome) who also got her $3,000 maximum contribution from Ralston after voting in favor of his awful original version of H.B. 1013 (what some called the “Everyone is Crazy Bill”). Dempsey’s vote score has been a consistent “F” 39% since we began publicizing. Dempsey is being boldly challenged by our endorsed candidate Luke Martin, who has also been endorsed by Georgia Right to Life and Veterans for America First.

Finally, consider Martin Momtahan (Dallas), who received a vote score of “C” 50% and “D” 45% but got his three grand from ol’ Ralston after voting for his original terrible version of H.B. 1013. Momtahan is being challenged by our endorsed candidate Neil Wolin in House District 17. Wolin has also been endorsed by Georgia Right to Life and others, but Momtahan has refused to debate him even once.

This is just a sampling handful of the cronies in the State House who are bought and controlled by Ralston. But these samples are particularly egregious since their rural districts in Georgia are far more conservative than these incumbents!

Another one of our endorsed State House candidates Shane Miller (Douglasville) was offered a check for $2,500 several months ago when visiting the capitol to promote his candidacy. Shane immediately recognized that taking a check from Ralston meant he was being bought by the Speaker to do his bidding, and he bravely returned the check, much to Ralston’s chagrin.

As far as we are concerned, Speaker David Ralston’s record of blocking bills advancing Republican principles over the last decade, his reported practices of abuse as an attorney, and his persecution of staunch conservatives and constitutionalist Republican heroes is so reprehensible that his endorsement is a kiss of death.

If you would like to up-end Ralston’s regime at the state capitol, oppose these cronies of Ralston and throw your support behind our endorsed candidates running against them!